Last summer when I was working to save up for this trip I’d sometimes go to the bakery and buy some bread for lunch. Instead of going back to the office to eat it however, I’d simply sit down in the dirt right next to the road; pretending to be traveling again.

Now when I do get to travel again, these moments really are my favorites of the day. Especially since I caught up with spring (spring!? The past weeks have rather been like the hottest days of summer to a Swede haha!)

Anyway, I guess it slowly began in Czech Republic – the warmth that is. I bought sandwiches and chocolate from the petrol stations and then I’d sit down on the asphalt leaning my back against the wall, enjoying the sun’s heat upon my face. Really, to a Swede who’s been working indoors during those few hours of sun the whole autumn and winter, it’s like reuniting with an old friend! 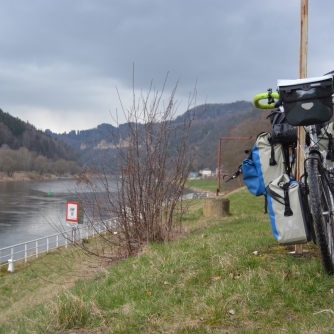 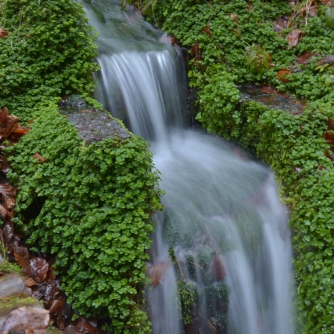 Now, I never went to Prague as I figured it wouldn’t be much fun biking into and out of the city – instead I simply steered my way to Kutna Hora to see the legendary bone house of Sedlec. Sure thing, in a sense the thousands of human skeletons decorating the interior of the church were breath-taking. But for me however – due to the many tourists (oh I was one myself, I know) – it demanded a lot of imagination to grasp the fact that these were real skeletons and not just some fake ones for a movie-shot. 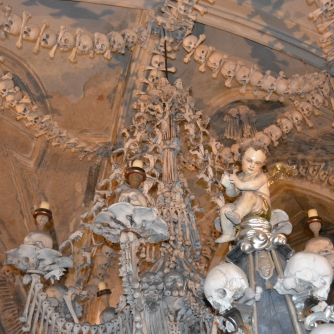 Kutna Hora really is a tourist magnet, and in that sense I guess I liked Olomouc as a city better, where I met up with my Czech friend Jakub. I hadn’t really made conversation to anybody since I left the hostel in Berlin – the people so far had been as reserved to strangers as Scandinavians – and it was nice to finally have a real chat with a friend and try out some beer at a local brewery. It was Easter time, and Jakub told me about this odd Easter tradition common in the former Soviet countries:

Every Easter Monday each year, all the men carry sticks around the streets and hit the women with it (not like a real hit though, more like a pat), and not just that – throw buckets of water at them! As they perform this act, they will be given Easter eggs and other gifts from the women. To me, it sounded like the weirdest tradition ever and I asked myself: “Would I have to look out for these men tomorrow?” 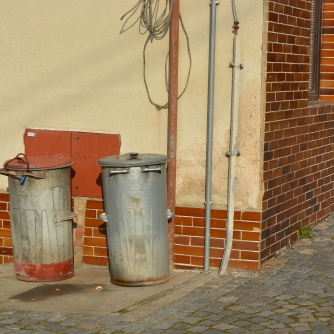 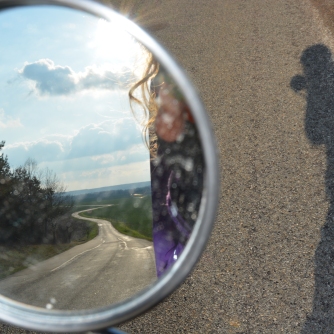 By the next morning I had almost forgotten about the tradition – when it struck me that the men on the street were indeed carrying around home-made sticks (they wouldn’t touch me however). I even got to talk to one of them. He approached me as I was turning back to Olomouc since my gears had started malfunctioning (I’m not much of a bike mechanic – I can fix a flat sure, but fine-tuning gears? No… so I thought I’d take it to a mechanic).

The man was riding a mountain bike and told me further about their tradition and explained that he was currently on his “Easter Monday tour”, going around the city to his sister, mother, and all his female friends to collect gifts. He carried a stick just like everybody else and showed me the painted Easter eggs he’d already gotten from his wife that morning. When I told him about my gear trouble he directed me to the nearest bike mechanic he knew of; it was a private property and the workshop was simply in the garage. The mechanic wouldn’t open at first as he, just like anyone else that day, was off from work. As we stood chatting to each other outside his window however, he decided to open in the end and bring my bike inside the garage to have a look at it.

Ten minutes later maybe, he told me it was fixed and wanted 100 CZK for it. I thought it was so incredibly cheap (like 30 SEK or 3 EUR) that I just handed him the money without actually trying the gears first. They turned out not to work. Did the mechanic just trick me off 100 CZK? Ah very well then – three Czech beers on me (that’s how cheap beer was) to the mechanic who didn’t want to do any proper work on his free day, I thought and let it go. The guys at Decathlon would fix it properly as well as giving the bike a basic service however, for twice the amount which is still a lot cheaper than in Sweden – a main reason why it’s so neat being a Swede in Czech Republic. 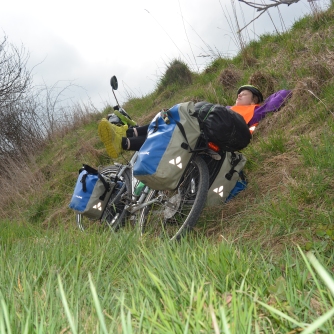 When crossing borders to Slovakia my spring feelings were woken for real. I wasn’t in the mountains, but the road would constantly go up and down in slopes of 10-17 degrees, and I still had a terrible cough adding up to it. Thus those moments resting in the grass were just the best; I inhaled the sweet scent of blossoming flowers mixed with the musty smell of dirt and dust, the birds were singing and the first bugs tickled my no longer covered legs and arms. For once I set camp early that first day in Slovakia, and I got to enjoy the evening sun as I was cooking and writing in my journal.

The next day, when I was biking another uphill, I noted a racer cyclist coming up from behind in my mirror. Now I always get a little frustrated when I see these racer snobs as I call them (snobs because of those slimmed clothes they are wearing), since whenever I’m pushing my bike real hard – it looks so easy for them! This one didn’t just pass me however, but actually stopped to talk – in English. His name was Eugenio and he wasn’t Slovakian, but from Bologna in Italy. We were both heading in the same direction; to Nitra, and we ended up making each other company for a bit. To him I was a snail I guess, and damn was I frustrated when he said “hold on I’m just gonna put on an extra shirt” and increased his speed to bike ahead for a bit, letting go of his handlebars with both hands as he put it on and as I… struggled to catch up, haha.

Together with his friend Giacomo and their host in Nitra we had pizza and beer later on that evening. Their host would even order a popular drink called “tatratea” for me (referring to the Slovakian Tatra mountains) which normally contains 72 % alcohol (!) Now, I didn’t need to worry – for he’d ordered the beginner’s version, only 52 % alcohol. Damn. I had a zip from it before giving it away to Eugenio (weak drinker? I guess I am…) We made toasts in all languages present; “Cheers, Skål, Na Zdravie, Saluti!” 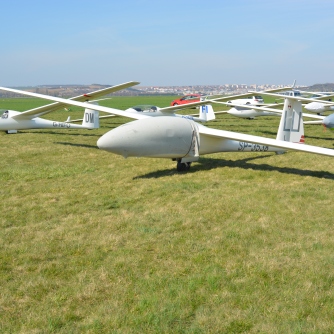 The reason for Eugenio’s and Giacomo’s stay in Slovakia was a glider competition in which Giacomo participated. Always dreamt about flying, it sounded like the coolest thing to me and I had great respect for what Giacomo was doing, but he was very modest about it. I visited the air field the next morning, and as Eugenio and I rode across it he told me to “pay close attention to all directions in case of gliders coming”! We’d make each other company for a few km more, and I found it funny that normally all he thought of on the bike was cadence. Cadence cadence cadence. Now, what I thought of on the bike was more like… Ohhh deer in sight, deer in sight! Shoot it shoot it (with the camera)! Oh oh bird, bird! Ohh nice landscape, nice view! AAAHHH BUMBY ROAD AHEAD, BUMPY ROAD AHEAD! POT HOLE POT HOLE!! Damn I’m so tired, fuck this uphill… OH OH! GRASS, GRAAASS I’M GONNA LIE ON THAT GRASS!! Well, let’s just say I do hope I managed to pass some of my liking for grass and ground onto him. (Oh and btw, he’s my sponsor of beer and pizza. Now could Marabou please sponsor me too, or Milka maybe?)

I didn’t spend much time in Slovakia (next time, Slovakia!) and before I knew it I was in Hungary, setting camp next to the Danube river – the city of Esztergom being just around the corner. I found myself and my tent to be right in the intersection point of two opposing forces; The loud, buzzing city and the calm woods next to the waterside – with droning cars, party music and barking dogs on my one side, and bird singing and water purling on my other. 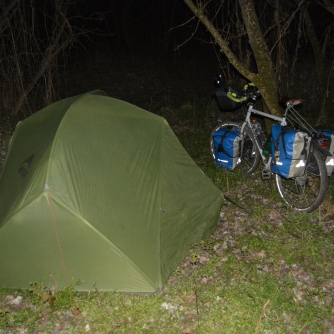 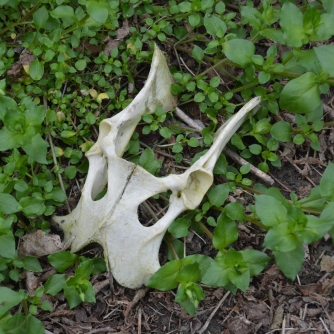 And then it was time to head to Budapest, in which I met up with my mom and sister – what could possibly have been a greater birthday gift!? It wasn’t the easiest task to find the apartment in which my mom was already staying in however. I don’t know how many people I stopped to explain “excuse me I’m looking for my mom” as I rode down the streets. I even managed to get inside a building in which I thought she’d be and parked my bike inside – only to realize it was the wrong building, and somehow ending up exiting from the other side of it. Which meant that all of a sudden I was outside on the street again… with my bike and all my belongings inside the building, and there was no way for me to open the doors and get into it (I had sneaked in along with someone else before)! Luckily, a girl my age would eventually enter the building and let me in to my bike as well. 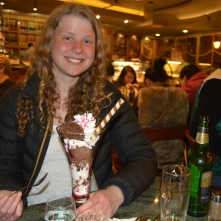 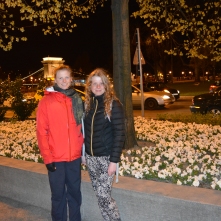 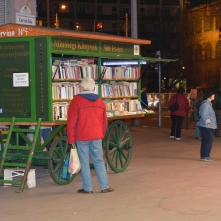 Now, I did have a great time in Budapest with my family – but nevertheless was I longing to get outside again. An apartment simply was no place for a dirt-covered bicycle and its rider. I felt a great emptiness as I left the city however, once again having to say goodbye to my mom and sister. It was hurtful, just like any goodbye to someone close. And my mood was low, as I spent the whole day on a heavily trafficked road. But then, as evening approached… I found my way back to one of those amazing moments again. To one of those perfect roads I won’t have to share with noisy cars but only with deers, rabbits and birds. With cherry blossoms and flowering bushes next to the road side, with the sun setting in the horizon and the only noise coming from a pond nearby; inhabited by numerous birds and frogs. 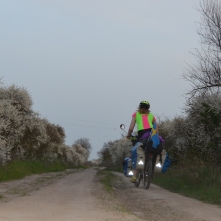 I pitched my tent feeling so cheerful and at peace, and I thought of that moment earlier when I’d sat down on the ground next to the petrol station enjoying a sandwich, with legs all covered in chain oil and dirt. A whole family had been staring at me from their car window; The parents and the older sister looking quite amused, meanwhile the younger brother looked all amazed, all impressed.

And I was wondering if the boy had been thinking just the same as I was. 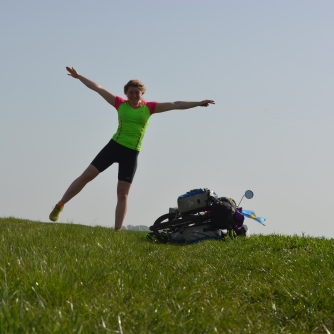 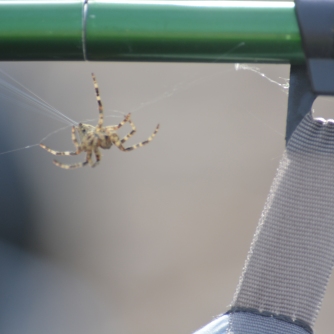 To be sitting on the ground with the sun shining upon you, with naked skin all covered in dirt and dried blood from scratch-wounds, with little spiders and ladybugs and such crawling over your body… And yet have enough to feed and provide for yourself,

The greatest privilege there is.